The First World War brought the most severe blow possible – Mennonites were forced to get rid of their land. The bad news for Gerhard’s family arrived on February 3, 1915, when Gerhard was still a toddler in Nikolaipol. Farms belonging to Gerhard’s grandmother, his father and his uncles were to be registered and prepared for liquidation. All Germans within 150 kilometres of Russia’s western border or within 150 kilometres of the Black Sea were required to sell their land within the next 16 months. Since this land was near the front lines of the war, there were few buyers. Most, if it was sold at all, was sold at auction where the state bank had the right of first refusal. Little cash changed hands, the majority was invested in government bonds which would come due in 25 years. Much of the land was sold at ten per cent of its value.[1]

Records retrieved from the Rostov State Archives in 2017 show the following assets of Gerhard’s family registered for disposal:

When I see it in a table like this, it’s pretty cut and dried. House and buildings. Thirty-two hectares. Russia. I’ve seen photos.

But I have searched for years, combing the internet for any hard evidence of that abandoned place Nikolaipol. Where is this place? Why doesn’t anyone know? Where are these people? The Odessa Digital library lists all the places Germans lived in Russia: there are nine Nikolaipols, eight Nikolaifelds, seven Nikolaitals, three Nikolaidorfs and a Nikolaiberg. Some of these are spelling variations of the same place, and some are completely different places. Some villages are known by their nicknames. I don’t know which is which. I’ve sent emails and letters into the empty spaces of Russia. Moscow, Sverdlovsk, Sytyvkar, Pechora, Rostov. To me they are just places to look. Keystroke by keystroke I Google-translated their Russian responses, I try to parse their meaning. No one has heard of my people. Perhaps you should look elsewhere, was the response.

If insanity is doing a thing over and over and expecting a different result, I passed that mile marker long ago. The searching became yearning – sehnsucht. There was no going back.

Then someone in a file room somewhere in Rostov sends documents not of the people I seek, but of their forefathers, documents I haven’t asked for, but documents someone in a file room in Rostov knows I need to see; an indescribable feeling rushes to the surface. In an instant, that which I could only imagine has become real. Without warning, my own history has punched me in the gut. Suddenly I can’t speak. Tears are in my eyes. I have found them.

In Russian “Wall” looks like this: Валль; Gerhard is Гергардь and Nikolaipol is Николай-Поль. I reassemble the Russian words in English, it’s my family just as Gerhard said. In this form, it affects me deeply. Now I can truly believe Gerhard’s journey.

Gerhard’s uncles Franz Franzovich, David Franzovich and his grandmother Augustina Ioganova Wall. Don’t worry if you can’t read it, they are all there.

These are my people.

My people and all other German and Mennonite settlers could no longer speak their language in public or gather in groups of more than two persons. Many kept their land for some time due to government incompetence and a dispute about whether the law applied to Mennonites. Eventually, though, it was all gone.

A second calamity facing Mennonites was the pressure on the tsar to end the military exemption. Mennonites themselves had carried firearms for personal protection for years and their commitment to non-violence was being questioned. At the outbreak of the First World War, Interior Minister A.A. Kvostsov noted that in Ekaterinoslav 792 guns were confiscated from Mennonites, including 347 revolvers. In the Mennonite towns of Gnadenfeld and Halbstadt 1,040 guns had been confiscated in a search of 2,447 homes and 369 Mennonites had been arrested on weapons charges.[4] He suggested the revolvers in particular were for a purpose other than hunting.

This is an excerpt from the Interior Minister’s letter to the tsar arguing the military exemption should end:

…when settling in Russia, almost all of them [the Mennonites] came from Prussia and have remained Germans, even though they have lived here for over one hundred years. And, like other German colonists, they have remained isolated from the Russian population. They converse primarily in German among themselves; some still do not understand Russian. The Mennonites maintained strong ties to Germany and its culture by mail before the war.[5]

But the tsar feared the Mennonites would simply disappear if he forced them into harm’s way and reminded the Interior Minister the Doukhobors left Russia en masse when he tried to conscript them into the military.

Undeterred, the Mennonites believed they had another card to play–we’re not German, we’re Dutch!

It was as if they believed they had caught out the tsar on a technicality. They argued they were Dutch people and therefore the land liquidation laws did not apply to them and they flooded Moscow with thousands of identical individual petitions. The petitions, written in German not Dutch, all contained the same wording: “In our veins flows not a single drop of German blood. We repudiate everything German.” It is doubtful any Mennonites were conversant in the Dutch language and they were still oblivious to their dire straits. As if they could undo a hundred years of history with this slight of hand. Eventually Jacob Niebuhr and Cornelius Hiebert bribed the Minister of Justice with 100,000 rubles to make sure the tsar saw the petitions and suspended the liquidation laws until a proper investigation could be conducted into the Mennonite heritage.[6] No investigation ever took place. Three months later the tsar abdicated his throne and placed Russia in the hands of a shaky provisional government.

With the tsar on the sidelines Mennonites had lost their champion.

When the war began in 1914, Mennonites behaved admirably. The Molochna Mennonites were the first to volunteer their young men for service in the medical corps. Khortitsa followed. Now Mennonite leaders offered to make medical service mandatory for their young men, even in time of peace, something they had refused earlier. Yet no matter how far they went in this direction, Mennonite sons were still not required to sacrifice their lives in battle as were the sons of the Ukrainian and Russian families around them.[7]

Russian soldiers running from the German attack on the eastern Front in WW1.

The war was going badly for Russia by 1917. The disaster at Tannenberg cancelled out an early success at Gumbinnen, and now the army was in retreat, losing millions of men along the way. “The Russian army was made up of poorly trained soldiers led by incompetent officers. Guns were so scarce that many recruits went into battle without a rifle.”[8] A million Russian soldiers quit and went home, others joined the Germans or gave themselves up. Better to be a live prisoner of war than a dead soldier.

On the home front the pot was boiling and in February 1917 it boiled over.

… the February Revolution of 1917 was a spontaneous uprising against a hated regime, driven by an avalanche of grievances: peasants demanding the land, workers sick of exploitation, soldiers disgusted by the war, ethnic minorities jostling for independence and almost all enraged by food shortages and spiraling prices. It was unplanned, uncoordinated, and it left the professional revolutionaries trailing in its wake.[9]

By early 1917, Russia was on the verge of total collapse. The army took 15 million men away from the land and food prices soared. An egg cost four times what it had in 1914, butter five times as much. The severe winter dealt the railways, overburdened by emergency shipments of coal and supplies, the final blow.[10]

Within weeks, representatives of German settlers met in Odessa to discuss forming an autonomous German state within Russian borders.[11] Tsar Nicholas abdicated and named his brother Grand Duke Michael as his successor, but Michael said thanks but no thanks.

Lenin the “good” dictator, stirs up the crowd.

Meanwhile the German government sought to add to the chaos in any way possible and came up with a simple yet devious plan they would regret for 70 years to come.

On April 3, 1917 a single car German train arrived in St. Petersburg containing Vladimir Lenin and 29 other exiled revolutionaries. “According to Winston Churchill, the Germans’ aim was to send Lenin to Russia ‘in the same way you might send a vial containing a culture of typhoid or of cholera into the water supply of a great city. And it worked with amazing accuracy…’[12] 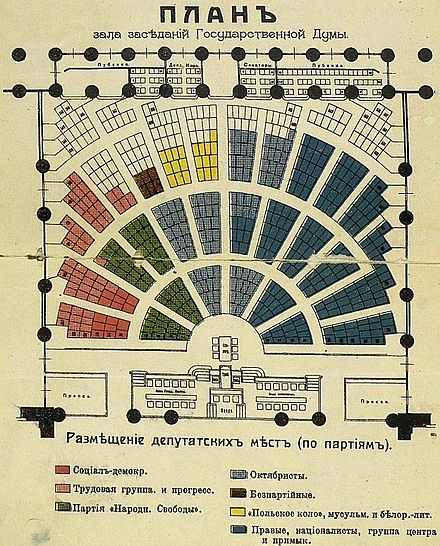 Seating plan for the Fourth Duma. Lenin’s party was to occupy the solid green seats at lower left.

Within six months Lenin’s political party, the Bolsheviks, were a force to be reckoned with. By November 1917 Russia had a new parliament and two-thirds of the population voted. When 707 newly elected members of parliament met in St. Petersburg on January 5, 1918 Lenin’s Bolshevik party was badly outnumbered. Other parties had more than twice as many seats, so the Bolsheviks walked out of the meeting and sent in armed men to evict the remaining parliament members. The next morning the building was surrounded by soldiers. The Bolsheviks entered the Winter Palace through an unlocked back door and became the government in a bloodless coup. Amid promises of power to the soviets, Vladimir Lenin, leader of the Bolsheviks, became the next dictator in the thousand-year history of dictators in Russia. This was how politics would be conducted from now on.

[1] Friesen, Abraham, In Defense of Privilege – Russian Mennonites and the State Before and during WWI., Kindred Productions, Winnipeg and Hillsboro, Historical Commission of the U.S. and Canadian Mennonite Brethren Churches, 2006, page 250.

[2] Gerhard’s Grandmother, wife of Franz Abram. Larissa Vasilieva in Kremlin Wives: The Secret Lives of the Women Behind the Kremlin Walls—From Lenin to Gorbachev claims that the name “Ioganovna” has Estonia heritage and that its Russian equivalent is “Ivanovna”.

One thought on “Ep. 16 Gerhard’s journey leaves a bruise”