Makhno too had his hands full with the return of the White Army and fought a running battle with both the Whites and the Reds as he retreated 600 kilometres west, gathering up thousands of thieves, deserters, Ukrainian peasants, and anyone with an axe to grind. In July 1919 Makhno killed the vicious warlord Nikifor Grigoriev, who incited over 40 pogroms in which at least 6,000 Jews died, and inherited his soldiers. Now he was ready for a surprise turnaround which arguably permitted the Red army to secure control of Russia and defeat the Whites.

Incredibly, at Perehonivka [48°32’5.12″N, 30°31’19.43″E], his army 600 kilometres from its home base, Makhno told his men: now we’ve got them where we want them! His army pivoted and attacked the unsuspecting First Officers’ Regiment of Simferopol. At first the regiment retreated, then it ran. Corpses lined the banks of the Sinyukha River for miles.[1] Now the Insurrectionist army 30,000 strong raced back to southern Ukraine with mayhem on its mind. One after the other, in town after town, they defeated the White army units. Makhno’s army travelled faster than the news of the defeat at Perehonivka. So great was the disruption of the White army that General Denikin diverted troops advancing on Moscow to stabilize the south.

Makhno’s right hand man Fyodor Shchuss in the centre. Below, more Makhnovists, see if you can find Freddie Mercury in a previous life. 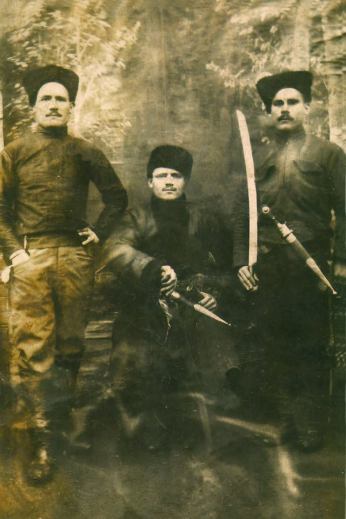 The Makhnovist advance may have changed the course of the twentieth century, but for those who had welcomed and supported Denikin, it brought sudden and unanticipated terror. In the Makhnovist blitzkrieg, all ‘known to be active enemies of the peasants and workers were condemned to death. Pomeshchiks [large landowners] and major kulaks [landowners who opposed collectivization] perished in great numbers’, and, presumably, the testimony of the peasantry was sufficient evidence on which to execute a kulak as an ‘active’ enemy. In every town the Makhnovists captured they executed enemy soldiers, police, Denikinist mayors, and priests.[2] In every town, they also recruited new soldiers, many of whom could have known little about the Makhnovist movement. In several instances, they incorporated into the Makhnovtchina whole armies – independent militias and forces led by Petliurist atamans – some of whom were subsequently executed for pogroms and self-motivated banditry. Then they rode on, their anger further fueled by the evidence of the Denikinists’ rampage. [3]

In October 1918, Makhno commanded 150 men; now one year later, his forty thousand soldiers conquered a region the size of England in which lived over seven million people.[4] Makhno’s forces reached south to the Sea of Azov and threatened Taganrog, the headquarters of the White army, fifty kilometres from where Gerhard was beginning his second year of primary school.

Now Mennonites paid the actual price of admission in a war they had recklessly entered. Hadn’t they been model citizens? Hadn’t they fulfilled their promise to the tsar to bring economic development to the steppes? The failures of a century of misguided leadership now roosted in their colonies, and ordinary colonists became victims of their leaders’ hubris. Mennonite historians have viewed the anarchist revenge killings as rooted in the jealousy of a people with a faulty work ethic and Makhno as simply another bandit come to steal their possessions. Gerhard also expresses this view in his memoirs. What they didn’t grasp in time is that this war, which altered the political trajectory of the continent for 70 years, was being contested on several levels. The Soviets and allies were fighting a class war against the wealthy bourgeoisie. Too many Mennonites fell into that group. Makhno was a sometime ally, sometime enemy of the Soviets and was fighting his own class war, struggling to create a separate political entity among the settler colonies. Mennonites did not accept Makhno’s vision and again became the enemy. The peasant soldiers, after years of slavery and serfdom, believed they would benefit from any redistribution of wealth, especially land. Mennonites and other German settlers had been purchasing the vast estates of Russian nobles for many years, and now peasants believed they stood to gain this valuable asset. Many peasant soldiers had personal scores to settle: when Germany went to war against Russia, Mennonites sided with the enemy while millions of Russian and Ukrainian peasants fought and died. Mennonites also rode out with the German army to help identify “enemies” among the peasants. To be sure Makhno, the Reds and the Whites also had a healthy cohort of greedy, lousy thieves spreading misery and disease wherever they went.

Gerhard doesn’t mention the consequences of being German in his village, but many Mennonite villages were targeted for vengeance by Makhno’s bloodthirsty followers, especially those villages which had stoutly protected themselves against Makhno and his army. 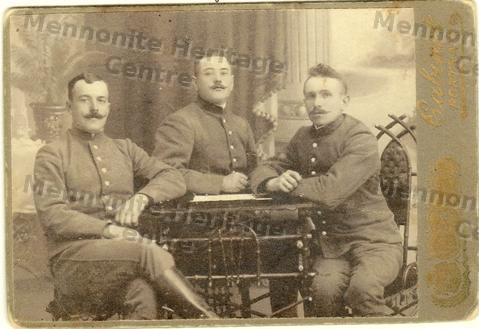 The man in the centre is Peter J. von Kampen trained by the German army (March 1918) for self-defense purposes and became the leader of the regional Selbstschutz unit including Eichenfeld village. Just before the October 26, 1919 massacre he went into hiding, and lived incognito as a barnyard worker with the registered name of Johann Penner. He died on 20 July 1923 of malaria in Batoon, on the Black Sea.

The Mennonite villages of Yazykovo colony lay just north of Khortitsa. Throughout 1919 the Yasykovo Selbstschutz unit effectively repelled “bandit” attacks throughout the spring of 1919. In one incident they feigned an arms turnover to local bandits. At the arranged spot of exchange the Mennonites ambushed the bandits and captured and executed a number of prisoners.[5] In July Soviet troops surrounded the village of Eichenfeld and ordered the villagers to assemble. Instead the local Selbstschutz attacked and routed the government troops, killing several. When the Selbstschutz realized it had killed Soviet soldiers it apologized but did not submit its weapons. The Selbstschutz suspected a man named Hiebert was reporting the names of Selbstschutz organizers to the local soviet Commissar Snissarenko. Selbstschutz leader Heinrich Heinrich decided to execute the soviet leadership. “ … they decided they would kill everybody, take no prisoners and not one person would utter a word. Three members of the soviet, including Hiebert and Snissnarenko, were murdered, but a fourth escaped by hiding in an oven.”[6]

In late October, Makhno’s forces were moving north from Zaporozhia (then Alexandrovsk) to Dnipropetrovsk (then Ekaterinoslav), and they moved through the villages of Khortitsa and Yazykovo colonies. Although he tried to prevent his soldiers wantonly killing civilians, especially his secret police force, who tormented innocent people because they enjoyed it,[7] in the weeks before the slaughter he exhorted his troops with the motto “Death to the bourgeoisie! Death to all their minions! Long live the liberation of the working class!  Long live the Social Revolution!”[8] Four days later they burned the village of Eichenfeld to the ground.

Dietrich Neufeld recorded this description of his first encounter with Makhno men:

At the first cross road we came upon horsemen and troikas [three horses harnessed to a carriage] careening madly into our village. The clouds of dust were so long we couldn’t see the end of the column.

Then two riders turned aside and sprang toward us. We remained rooted to the spot in sheer terror. The two horses pranced before us, the reins held so short that the poor beasts were forced to hold their jaws open over swollen tongues. In spite of the warm weather, both riders were wearing big, longhaired fur caps cocked to one side while their long locks cascaded wildly down the other side. Their dusty faces looked dark and forbidding, their eyes impetuous and dangerous. Gaudy costumes heightened their audacious bearing and insolent expressions. They were mounted arsenals, with rifle slung over one shoulder, sabres dangling from the hip and pistols bulging behind the belt. They kept swishing their nagaikas  [whips]. Even while they were questioning us they kept slashing their horses about the ribs and flanks until they snorted with pain.[9]

A list of the Eichenfeld victims written by Nazi ethnographer Karl Stumpp.

On November 8, 1919 these were the men who surrounded the village and blocked all exits. There were scores to settle:

Various descriptions have been given of the manner in which the victims of the Eichenfeld massacre died. Some, perhaps most, were shot in their homes, on the streets, or in groups of men herded together by the anarchists. Others were bayoneted or hacked to death. Later lurid rumors circulated that many of the victims were mutilated and hacked into pieces making positive identification almost impossible.[10]

By morning all landowners and sons of landowners older than 16 had been executed; eighty bodies lay strewn in the homes, streets and farmyards of the village. In the following days 56 more died violent deaths.

Raisa Gurazda, a resident of Novopetrovka interviewed by Bobyleva, relates the story of her mother:

Later some daring people from neighbouring villages came, after everything was deserted. They took all the doors and windows. The Germans had everything of the best quality … Not a single German home remained standing in the village they were torn down … It was like a ‘black hole’.  The bricks were scattered around.  It was desolate and the cats slunk about, and the dogs.[11]

An anonymous diarist who left Eichenfeld during the German occupation wrote these reflections:

I do not want to sit in judgement over my own people, but I believe that one had not made the surrounding Russians into friends in the good years, but rather to enemies and this murder was the answer.[12]

[1] Foster, Wayne, The Makhnovists and the Mennonites: war and peace in the Ukrainian Revolution, blog entry, https://libcom.org/history/makhnovists-mennonites-war-peace-ukrainian-civil-war, accessed February 19, 2018.

[5] Janzen, Marianne, The Story of Eichenfeld, unpublished manuscript, page 8, quoted in
Patterson, Sean David, The Makhnos of Memory: Mennonite and Makhnovist Narratives of the Civil War in Ukraine, 1917-1921, page 114.