That’s it folks. The only record of Gerhard’s entry to Canada.

There is a handwritten, barely legible record of Gerhard’s arrival in Halifax on September 5, 1947 which you can get by making a request under the Access to Information Act. If you have access to Canada’s “big book of immigrants” known as Canadian Government Return – Canadian Immigration Service and you look on Sheet 27 of Volume 4, Page 181 you’ll find Gerhard. His birthplace is listed as Nokolaipol[sic], his nationality, originally listed as Ukrainian, is crossed out and Dutch substituted. It is clear from this that he also played the “Dutch Gambit” (Holländerei) successfully. Gerhard confirmed he had never been in Canada before, had never been refused entry to or deported from Canada and that he intended to stay in Canada. To the question “Can you read?” he had answered “yes” but the languages he was fluent in were German, Russian and Ukrainian. He may have told a white lie answering “lumberman” to the question “What trade or occupation did you follow in your home country?”; conveniently that was also the answer he gave to the next question which was “What trade or occupation do you intend to follow in Canada?” Other questions inquired whether he had any physical or mental defects or if he was tubercular, all were answered no. “None known” was the answer to the question regarding the names of his closest relatives in the country from which he came. Better not to involve Lydia. The question regarding the amount of money in his possession was simply answered “no.” With this information Gerhard had met the requirements to live in Canada, was granted landed immigrant status and released to his guardian – the Nipigon Lake Lumber Company.

Eight hundred and thirty other Displaced Persons, including 31 Mennonites, became landed immigrants that day as they recovered from the seasickness of the rough crossing and the insistent interrogations of Canadian government agents.

What to make of a comment like that? Did Gerhard believe Nazis could enter Canada regardless of their wartime deeds because immigration officials respected the SS? Did Gerhard believe the entire world shared his own respect for the SS? Gerhard had not left the German military very far behind him, even at the writing of his memoirs many years later.

In the years preceding World War Two, Canada was “highly selective” in which immigrants it permitted to enter the country. Today we would substitute racist for highly selective. Humanitarian considerations didn’t exist. In 1938-39 Canada denied Jewish refugees from Germany, Austria and Czechoslovakia permission to come to Canada, despite repeated requests. “These refusals were justified under the existing immigration regulations and strongly influenced by Canadian assumptions about Jewish immigrants.”[1]

Canadians feared immigrants would take their jobs, or ruin the economy, or be a financial burden on society, or upset the “proper” racial mix of the population. Canada based its decisions on stereotypical notions of various ethnic groups. However, three factors forced Canada to change.

First, Canadians finally realized the depth of the catastrophe occurring in Europe: the millions of homeless, the starvation, the broken social structures. Young civil servants sent overseas to support the United Nations refugee organizations returned and impressed upon the Canadian government the urgent situation.

Second, it was clear returning soldiers were no longer hewers of wood and haulers of water. “Returning soldiers were seeking work in cities.  Seasonal work such as logging had become relatively unattractive to the veterans who were looking for permanent, lucrative, largely urban, work.”[2]

After passing through the selection and immigration process, displaced persons (DPs) arrived in Halifax and became the responsibility of the Department of Labour and the employers holding DP contracts. When healthy DPs arrived, this was a relatively seamless process whereby individuals were given train tickets to their final destination before they left the ship.[3]

Each new landed immigrant “had been selected by Canadian teams in Europe, screened, and offered contracts to work as pulpwood cutters in Canada for a period of ten months. Although many had family remaining in Europe and no real work experience in the pulp and paper industry, they were grateful for the work, the chance to settle in Canada and build a life for themselves and for those waiting for their turn to cross the Atlantic.”[4] 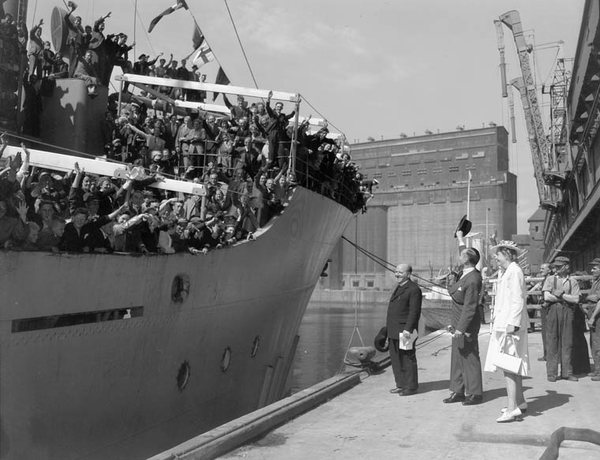 I’m sure government and industry officials hoped they would receive the cream of the pulpwood cutting crop from Scandinavia, where the best woodcutters were rumoured to reside, but the reality is they were receiving war-damaged desperate men willing to do or say anything to get out of Europe.

… there was an expectation … that the teams would find experienced, specialized, skilled loggers among the DPs.  It quickly became apparent that among the applicants claiming to have experience in the woods, most had been limited to the occasional tree removal on family farms, not professional work in the remote bush.[5]

Gerhard’s own experience as a woods worker in the Gulag lasted two days and he was rewarded with three days in the punishment cell.

… among these first workers were men who had lied or hidden aspects about their pre-war occupations. Some had been students, professionals, or other kinds of white-collar workers with a minimum of lumbering, mining, or construction experience.  It did not take long for managers to catch on and to agree to ignore this aspect as long as they worked hard.[6]

Tim Dodd was a fireman for the CPR when the displaced persons first arrived in Canada. Speaking at a refugee reunion he said: “You truly did start from nothing. We used to drop you off usually in unlit clearings deep in the bush, miles from any town. There would be only a couple of trucks backed up to the track. The refugees were crammed into low-grade rolling stock. We were appalled at the conditions in which they were arriving.”[7]

But Gerhard had died and gone to heaven.

That’s Gerhard with mustache and beard in the middle.

Even before arriving in Canada, workers were taught English and what was expected of them in Canadian society. The Preparatory Commission for the International Refugee Organization (PCIRO) gave woodsmen waiting to ship out for Canada at Diepholz, Germany a vocabulary list in English and German designed to give them the basics for lumber camp life. Basic vocabulary included:

Some basic phrases were included in the loggers’ vocabulary list.

This fifty word vocabulary was designed to get men to the job site, start work safely, and settle in.[8]

It wasn’t all feasting. Each of the men had signed a ten-month contract to perform back-breaking work that no longer appealed to returning Canadian soldiers. And Gerhard was having the time of his life!

I _____ do hereby undertake that if admitted to Canada I will accept employment in Lumbering Pulpwood or Logging operations work with such employer as may be approved by the Minister of Labour for Canada or his representatives at the wage rates and under the working conditions prevailing in the locality of employment for comparable classifications of employment and that I will conform to the prevailing rules and working regulations of the employer by whom I am employed.

I certify that the above undertaking was interpreted to me in my own language and that the contents thereof are fully understood.

The men were given a stand of trees to work in. They “needed to clear their stand of windfalls and brush; take down trees across their cleared roadway; trim the branches off fallen trees; and cut them into appropriate lengths, leaving four inches or so for wastage. After a day’s quota had been cut, the worker then had to pile the lengths of wood on skids parallel to the road to be moved by horse, or later, by truck. When lengths were long, this job of piling the day’s cutting was ‘generally conceded to be the toughest part of the job…’”[10]

Workers slept on “steel beds, mattresses, blankets, sheets and pillows.” Heating was “suitable,” provided by a wood stove and some buildings had electric light.  Food was plentiful and well received by camp residents.

Supplies were available for sale at the camp store. Recreation facilities such as “recreation rooms, radios, reading material” and sometimes “occasional moving pictures” were also available. DPs were warned before arrival of the “handicap” of blackflies and mosquitoes, but also promised that repellant would be available at the camp store. When workers needed medical care, it would be available, for “a very small fee.”[11]

The work was hard but life was good. No matter how difficult the working conditions they were immeasurably better than life in Germany. They had jobs and better food than they had eaten in years, and “they had goals; fulfill the contract, learn English, and bring any remaining family to Canada.”[12] There was no going back.

Gerhard’s period of forest labour soon ended. He had arrived late in the woods season and after six months the season was over. If he found a job before the next season began, he would be released from the final four months of his ten-month commitment. He had enough money to take the train to British Columbia to stay with his aunt Anna Siemens who had immigrated in 1929.

In Canada, Gerhard wrote in a little black booklet the things he did not want to forget: names and addresses of people he knew in Germany, Paraguay, Winnipeg, Buenos Aries, Michigan, pages of birthdates, weddings and death dates, lists of food and clothing items sent overseas and poetry. It’s the poems that tell us more than names and addresses ever could (my translation, author unknown): 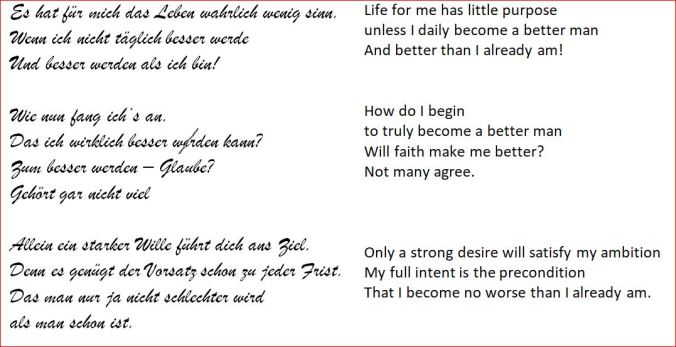 The second poem is by Ferdinand Freiligrath and appears in Franz Liszt’s Liebestraume No. 3. 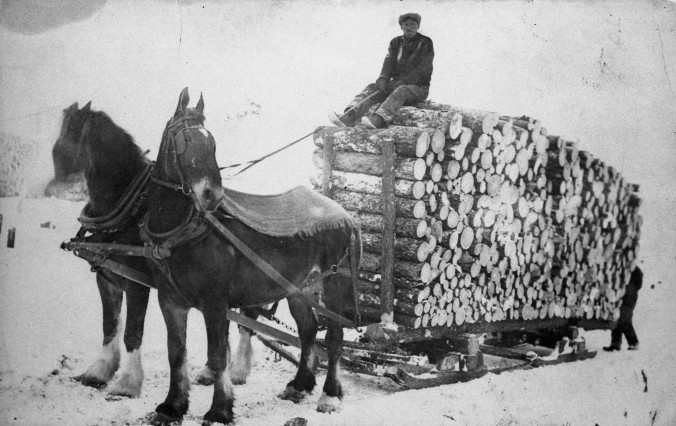